Summary judgement: Sorry, but you don’t get a jury trial - Gardi & Haught, Ltd. 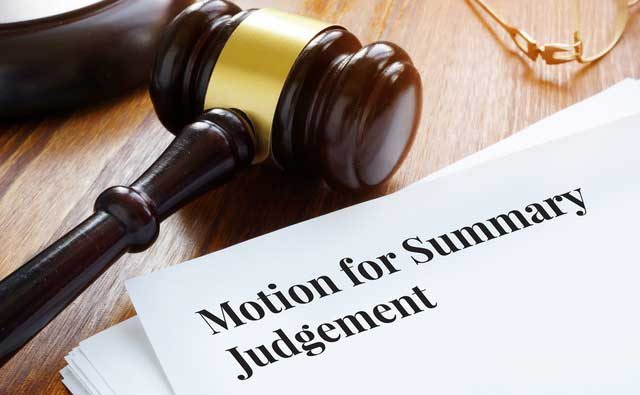 Summary judgement: Sorry, but you don’t get a jury trial

Injured parties sometimes are told by attorneys that their case “won’t make it past summary judgment.” What on earth does this mean? If they’re like me, I’d rather read a summary than the whole book, so how could summary anything be so bad? Trust me, it is bad. Very, very bad.

Summary judgment occurs in a lawsuit after all the facts are known to all of the parties, but before the actual trial has begun. When asked by either party, the judge will review these facts and may make a determination that it is impossible for one of the parties to win the case. When reviewing a case for summary judgment, the judge is required to view the facts of the case most favorably to the non-moving party – essentially giving them the benefit-of-the-doubt. If the judge still can’t see a way for that party to win the case, then summary judgment will be granted, and the case is thrown out.  That’s right … the case is over. You don’t get a chance to argue your case in front of a jury. You can see why an attorney may be hesitant to take your case if there is a chance that summary judgment will be granted against you. All the work, time, and effort were for nothing, and you don’t get your day in court.

Here’s an example. Let’s say Pete gets injured when he slips and falls on ice in the parking lot at DookieMart. After his attorney files a lawsuit, Pete has to sit for a deposition where DookiMart’s attorney gets to ask him questions under oath. Pete testifies that he has no idea how long the ice was there or where it came from, but he knows it was snowing heavily at the time he fell. He also testifies that DookieMart’s employee, Elvis Stoner, told him that DookieMart keeps lots of salt in their store but they never use it because they are trying to save on costs.

DookieMart’s attorney files a motion for summary with the court, arguing that even if everything that Pete says is true, he slipped and fell on a natural accumulation of ice. The attorney attaches a copy of Pete’s deposition transcript, along with pictures of the parking lot and a weather report from the day of the accident. The assigned judge, Al B. Nice, reviews these materials along with the relevant appellate cases opinions that are cited in the attorney’s motion. Judge Nice, despite his name, grants summary judgment and tosses the case out.

How could a nice judge like Judge Nice do such a thing? Unfortunately for Pete, Judge Nice is obligated to follow the law. The long-standing law in Illinois is that falls that occur due to natural accumulations of snow or ice are generally not the responsibility of the property-owner.  In order to defeat the summary judgment motion, Pete would’ve had to come forward with some sort of evidence that his fall was caused by an unnatural accumulation (someone moved the ice to that location, or it froze in a puddle in that area because the pavement was broken). Without that evidence, under the law, Pete could never win his case. Having been advised that this was the law by DookieMart’s attorney, Judge Nice had no choice but to grant the motion. Subsequently he had his name changed to Judge Al B. Notsonice.

This is why it is so important to make sure the attorney you hire is ready to commit 110% to your case at the outset. Was Pete’s attorney ready and willing to put up the money to hire an expert engineer or architect to examine the parking lot for defects? Did he take depositions of DookieMart’s employees to find out if they had shoveled the snow in the fall-down area and moved it from where it had originally fallen? Did he review the weather reports to find out the exact start and stop times of the snow that day? The evidence may not have been enough to win at trial, but it certainly could’ve gotten Pete past summary judgment. More importantly, they could have gotten Pete his day in court.

For a free case evaluation click on the button below.