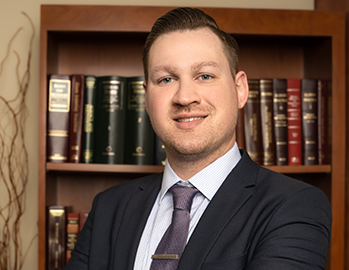 After spending nearly 10 years in the city of Chicago, Aaron moved to the suburbs. In his free time Aaron enjoys spending time with his family, friends, and his dog. He also enjoys playing golf, basketball, or training in Muay Thai kickboxing.

Aaron obtained his Undergraduate Degree in Political Science from Dominican University in River Forest, Illinois, where he was also a member of the Dominican basketball team, and captain of the Dominican golf team. In 2017, Aaron received his Juris Doctorate Degree from The John Marshall Law School in Chicago. While in law school he obtained Illinois Supreme Court Rule 711 License which allowed him to practice law as a student and swore into the Northern District of Illinois and the Central District of Illinois.

Aaron T. Novasic joined Gardi, Haught, Fischer & Bhosale in 2021. Prior, Aaron lived and practiced law at a mid-sized law firm in downtown Chicago. His practice includes cases arising out of motor vehicle accidents, slip and falls, workers compensation, DRAM shop, FELA actions, Dog Bite cases, and other negligence actions. In the past, he also had the opportunity to try several jury trials and a bench trial which was upheld by the Illinois 1st District Appellate Court. During his education, he tried a Section 1983 Civil Rights case in the Central District of Illinois and eventually settled with the Attorney General’s office. Aaron also has experience clerking for the Racine County District Attorney’s office in Wisconsin. Additionally, Novasic’s work experience includes a medical background in physical therapy which is essential in understanding the medical treatment of clients and provides fundamental legal insight from a medical perspective, in regards for example, to injuries clients might suffer from, and the healing process that needs to take place to recover from those injuries. Aaron has been licensed to practice law in the State of Illinois since 2018. Aaron is an active member of several associations including; Associations: – the American Bar Association – the Illinois State Bar Association – the Chicago Bar Association – the American Association for Justice – the Croatian American Bar Association – the Illinois Trial Lawyers Association – the Workers Compensation Lawyers Association