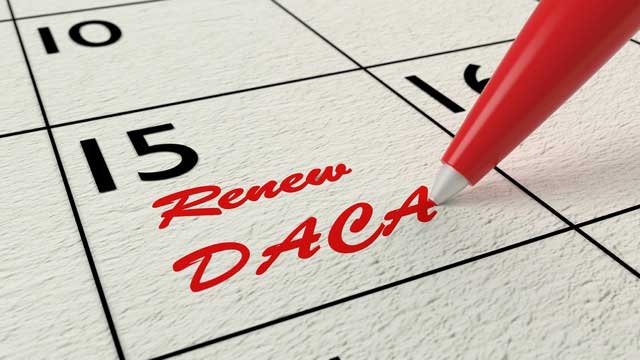 An Update on DACA: Renewals and Reviews

An Update on DACA: Renewals and Reviews

While there are still questions in the air, the latest update on DACA (Deferred Action for Childhood Arrivals) includes pending reviews in court and new opportunities for immigrants who are previous recipients of the legislation benefits.

To the dismay and trepidation of Dreamers everywhere, on September 5, 2017, the United States Department of Homeland Security (DHS) issued a memo from the Acting Secretary, Elaine Duke, which rescinded the Deferred Action for Childhood Arrivals (DACA). The memo basically announced that the DHS would no longer accept new DACA applications or renewals filed after October 5, 2017.

On January 9, 2018, Federal Judge William Alsup of the Northern District of California issued an opinion in the pending matter of Regents of University of California and Janet Napolitano v. the DHS. Alsup ruled that while the lawsuit is pending, anyone who had DACA status when the program was rescinded on Sept. 5 can still renew it. The judge did not rule on the merits of the case but said the plaintiffs would suffer irreparable harm if the Trump administration ended DACA before the legal dispute is resolved. In summary, Judge Alsup’s opinion stated:

On January 13, 2018, the United States Citizenry and Immigration Service (USCIS) released a statement saying that due to a federal court order, USCIS has resumed accepting requests to renew a grant of deferred action under DACA. They also said until further notice, and unless otherwise provided in this guidance, “the DACA policy will be operated on the terms in place before it was rescinded on Sept. 5, 2017.”

However, on January 18, 2018, the Trump Administration bypassed the 9th Circuit Court of Appeals and asked the U.S. Supreme Court to directly review the injunction based on its merits.

On January 23, 2018, the Justices confirmed they will decide whether or not they will hear the Trump administration’s appeal of federal district court order without waiting for an appeals court ruling.

That timetable will make it possible for the Justices to consider what they are going to do with the case on February 16. If they vote to grant review and agree to finish it in the current term, they would lay out a faster-than-usual timetable for further written briefs and a public hearing.

If the review is granted, a hearing would probably be held in April. The Justices strongly favor finishing all of their hearings by the end of April in any given term so they can keep the final two months of a term open for completing the writing of their decisions.

At Gardi, Haught, Fischer & Bhosale LTD, we continue to help immigrants navigate the very complicated legal aspects of their immigration, especially as the updates on DACA continue. If we can help you you’re your immigration case, feel free to request a free case evaluation by clicking on the button below.