Fourth of July Weekend – A Deadly Weekend for DUIs

FOURTH OF JULY WEEKEND – A DEADLY WEEKEND FOR DUIs

Though many people don’t realize it, we are in one of the most dangerous times on the road when it comes to DUIs— the Fourth of July holiday!  It’s true that Thanksgiving, Christmas and New Year’s see their share of drunk drivers, but surprisingly, by some statistics the Fourth of July tops the list. Consider these figures from the Office of the Illinois Secretary of State showing alcohol-related fatalities in Illinois. 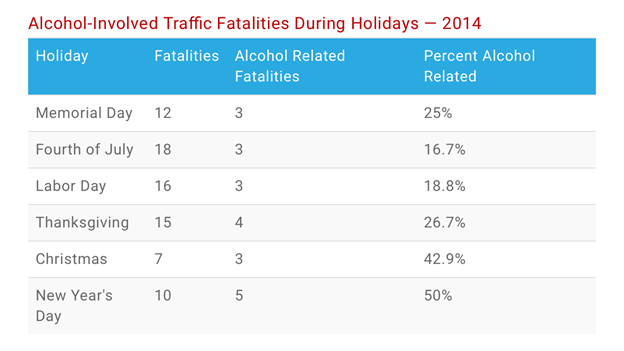 Unfortunately, it is also a time when many of the drinkers on the road are underage. In a study done by the Insurance Institute for Highway Safety on fatal auto accidents from 2005 to 2009, July fourth is the deadliest day of the year, with an average of 144 driving related deaths. The saddest thing about the study was that teens comprised 10 percent of the fatalities. The combination of warm weather, ample free time and reduced parental guidance on the holiday all contribute to the problem.

One bit of good news is that on the average, the number of underage DUIs has reduced from 2011 to 2015. This is, in large part, due to our State’s zero tolerance laws.

Illinois and its DUI laws have been hailed by organizations like Mothers Against Drunk Driving (MADD) and the Alliance Against Intoxicated Motorists (AAIM). Illinois remains a MADD “five-star state” for its efforts to keep drunk drivers off the roads and provide harsher penalties to DUI offenders. 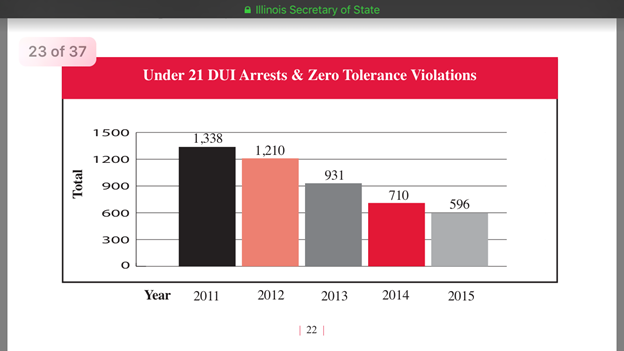 Do you know when you’ve “had enough?” Of those who legally drink, many do not often judge wisely when they should or should not be driving. They have a few drinks, find themselves on the road, and then may very well find themselves charged with a DUI. According to figures from cyberdriveillinois.com, of the more than 10,000 lives lost in alcohol-related crashes in the U.S., roughly a third of the drivers over the legal limit were between the ages of 21-24, followed by 29 percent of drivers between the ages of 25-34.

In the state of Illinois, the legal limit for driving under the influence is a BAC (blood alcohol concentration) of .08%. However, driving with a BAC between .05% and .08% can definitely impair one’s driving, increase your chances of a fatal accident and put you at risk for a DUI arrest.

As you can see by the chart below, for the average man or woman, consuming three drinks in one hour raises your BAC to a level where you will likely be unable to legally drive. Even though it’s true that alcohol tolerance differs from person to person, the chart shows that the number of drinks that can be consumed safely before you get behind the wheel is often lower than people think and can result in a BAC level that exceeds the legal limit – even if one personally feels they can safely operate a motor vehicle. 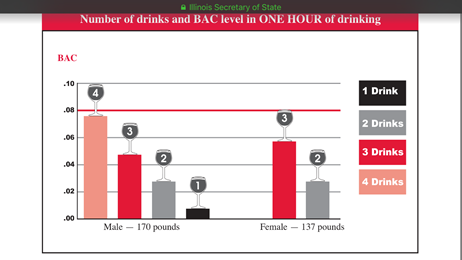 Know the DUI Laws in Illinois

Up until last year, drunk drivers would immediately receive a mandatory “hard time” period of 30-days at the outset of their 6 or 12-month statutory summary license suspension. Then, IL Senate Bill 627 was recently signed into law, eliminating these “hard time” periods and replacing them with the requirement to apply for and drive with a BAIID (breath ignition interlock device) installed on their vehicle. The BAIID prevents the engine from starting unless the driver’s blood alcohol is .025 or under.

There are, of course, some exceptions for special cases.

For those who drive under the influence and cause an accident, they will be required to keep the BAIID on their car until they are “fully reinstated” to full driving privileges, upon the clearance of their revocation.

Those who received the DUI while driving on a revoked license are required to keep the BAIID on their car during the RDP (Restricted Driving Permit) period which begins after a successful administrative hearing (post-DUI conviction), which is during the pendency of the motorist’s revocation period. The BAIID is only removed when the driver is “fully reinstated” to full driving privileges and the IL driver’s license is returned to the motorist.  Similarly, repeat offenders can only have their BAIID removed at the conclusion of the RDP when the driver is “fully reinstated” and all other Secretary of State mandated conditions have been satisfied.

Whatever you do this weekend to celebrate our nation’s independence, we hope you do it responsibly! However, if we can ever be of assistance to you for any legal matter, a DUI or any other, please reach out to us at 847.944.9400.

CDL Holders and DUIs: What Every Truck Driver Should Know

The Suspension of Driving Privileges in Illinois DUI Offenses